Although compounding is extrusion, it is a unique enough subset of extrusion to merit its own discussion. Compounding involves the addition of resins, fillers, stabilizers, reinforcements, and or colorants to a base resin.

What separates standard profile or film extrusion from compounding is the amount of additives introduced to the base resin – this is where compounders add their value. A typical compounding line will have multiple ports where additives are introduced to the melt. These ports are areas of low melt pressure, and are often difficult for purging compounds to clean.

Because of these differences and challenges, compounding is an area that is currently under-served by commercial purging compounds.

Here are 11 tips we share with compounding customers to make the most of their purging:

Ready to reduce your production downtime to protect your profits? Learn more about how purging compounds and process efficiency work in tandem. 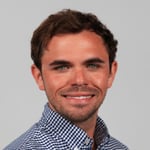 Tom Hanvey is the Senior Marketing Manager for Asaclean Purging Compounds. He's worked in the plastics industry for over 6 years and focuses on providing easy-to-digest content to processors looking for an edge on their competition.