How to Achieve Cost Savings in Blown Film Extrusion 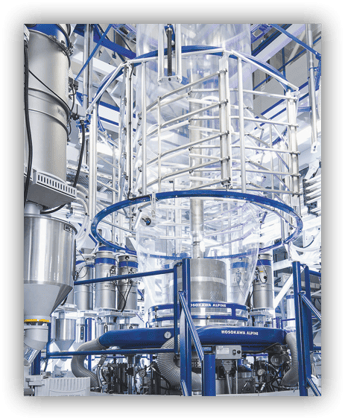 Plastics processors have different ways of measuring success when purging. Some care about reducing machine cost. Some worry about reducing resin use. Others want to reduce scrap or teardowns. But regardless of your pain point, everything comes down to time and money. Today we will look at a blown film extruder in the Southwest who had been using their next resin up as a purge solution (or lack thereof).

This Southwestern blown-film plant was struggling with a change from black to white, taking 12 to 18 hours to purge with the next production resin (in this case, high density polyethylene). Since manual cleaning of the head, barrel, and screw was not an acceptable option, large quantities of natural resin were used to facilitate the change.

The plant accepted a mechanical purge sample and scheduled a test, but using the sample, they decided to mix it with resin. As such, it was administered at rate of 50%, meaning a total amount between resin and purge of approximately 220lbs. Processing time was reduced from 18 hours to 7 hours. As they had used all the mixed material, they did not perform a second test using 100% purge. What was the reason for this? The production personnel preferred their current method. This is because all the resin used during the color change can be reintroduced into other products as recycled material.

Let's stop for a moment and consider whether just using resin only instead of purging is the best option for achieving total cleanliness of the machine considering all factors involved.

What would we consider critical for a savings project in the company and how would we determine the most efficient method? At one plant, it may be that the time lost and time saved determines the success of a purge, or at others it may be just be material saved when reducing rejects or waste, to name but a few.

Time is money. What has a greater impact on the income of a company: a machine working 100% of the time, or saving the equivalent of the salary of man hours spent on the maintenance of the machines during cleaning? Resin performance is critical, and it would be ideal if all resin that came out came out in the form of a sale-able product the first time around. If this is not possible, then I wonder what would be better: to continue using regrind which does not clean to take advantage of it by recovering it in products that allow it? Or to sell it in the best possible state to obtain an income?

I consider the factors mentioned above to be the most obvious options. But remember that there may be hidden costs. There are many factors and the weight of each factor could change from company to company, or from season to season. When the goal of a project is to clean your machine, or to achieve cleanliness faster, a good mechanical or chemical purge will give the best result.

With the right tools and the right process, you can overcome any processing challenges associated with difficult changeovers. Get your free consultation today and make sure you're getting the most out of your process.

* For safety reasons it should be mandatory because dust is known as a material that can turn a fire into a catastrophe.

Ready to reduce your production downtime to protect your profits? Learn more about how purging compounds and process efficiency work in tandem.